So another book of mine has been completed and has gone up on Kindle to be available for the world to read. The excitement that comes with putting out a new book will never leave me. This one is my seventh and in a way it is the one I have found the biggest challenge and the most fun and certainly it has been more confusing than I anticipated when I began writing  it :The Case of the Matching Charms, is its title and it’s written, I hope, for kids a bit older than those who read The Dreamstealers Trilogy (published by Y Lolfa 2003-2006). Those books were intended for kids 8 years old and upward. I think I see this as being more like 13years and upward.

Arianne Lexicon is the heroine of this book, the first in an intended series. At age sixteen she does not know what she wants to do with her life, but she is fascinated by puzzles and mysteries. She becomes a detective more by accident than on purpose. Her parents are antique dealers, and she lives with them above the shop. Her best friends also live above their parents’ businesses, Nick from the chip shop, and Joy from the phone and IT shop. These two are invaluable in being around when she needs them.

I wrote the book in a way quite unlike any of my former novels which I have always planned. This one came without planning. I started it and had no idea where it would go, and it seemed to find a direction on its own which was so unexpected, at moments, that I kept thinking perhaps I ought to sit down and make an outline plan, in my usual way. But this was an experiment in following rather than leading the story. So I wrote as though I was reading, or as though I myself was looking for clues, and what would come next. This was scary sometimes because I did think I might never finish it. I learned about ‘writer’s block’ because at one point I ran out of ideas and the book came to a sudden halt very close to the final chapters. It was as though the freedom I had experienced had become a handicap. I had no ‘outline framework’ to look for in my files, which I would normally have and I could not even tell whether there was a happy ending. Then one day, after weeks of looking at it, and attempting to start other things, I got a brainwave and went back to it, and it wrote itself to the end. This experience has meant that I feel very protective of this particular book. It was written spontaneously and am interested to see whether it has worked, and people who read it like it. 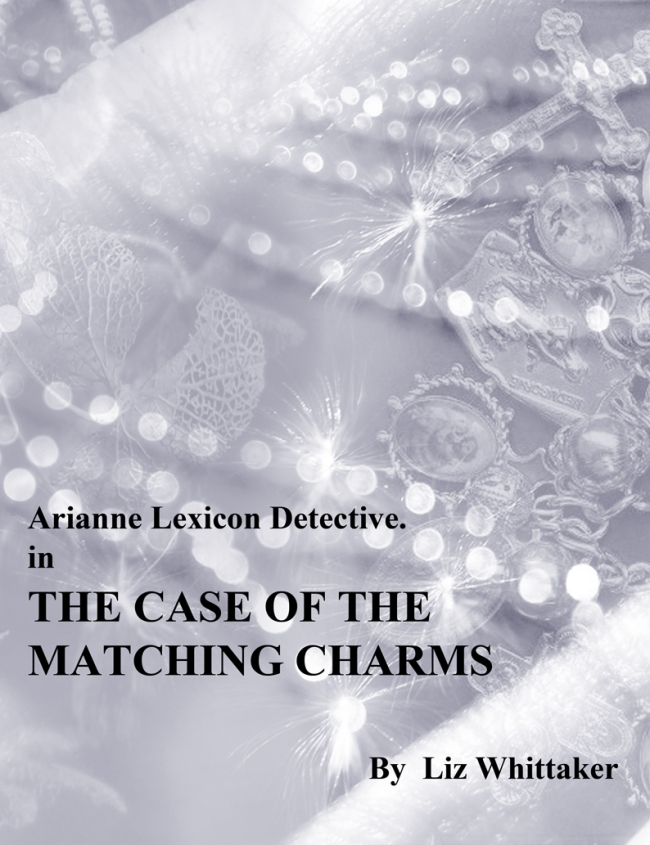 This is the cover image, dreamed up and created by Jacob Whittaker to whom I communicated some of the items in the plot.

It sometimes strikes me as curious that ‘mysteries’ are so prevalent in our reading matter, most particularly in our choice of novels. Whether we’re reading on Kindle, or on the printed page of a battered old paper back from the charity shop, mysteries are not only among my favourite reads but those of my friends and students too. So some years back, I came to the conclusion, that since I loved to read them, it might be an enjoyable exercise to try my hand at writing one. I created a female accidental detective – a retired astrologer, living in West Wales – and brought a young woman to her door whose father had disappeared. The novel grew to completion over a period of about a year, and I called it The Rules of Heaven, my first Grace de Savira mystery. I had loved writing it, and was confident that it was a page-turner, a good read. Then came the endless months of sending it off to publishers, during which time I wrote the second one, A Thorn in the Flesh. By the time the first one had been roundly rejected by every publisher I could think of sending it to, I was half way through the third book, From High Places. My disappointment about the first one meant I never sent the next one out, and none of them was ever published. I wrote the Dreamstealers trilogy for children, which did get published (YLolfa), then historical novels, also published (Llanerch Press), but the mysteries remained in the filing cabinet. Until recently when the first two Grace de Savira mysteries became available on Kindle, and to my great pleasure people have found them, and have actually bought them and read them. So I am now in the process of working on the unfinished book. The biggest mystery in the world of literature is how the choices are made to publish or not publish. And I have an even more exciting mystery up ahead, and this will come to light at the annual Penfro Book Festival. More of that again.

When I first came across Alexander McCall Smith’s books, it was not the African mysteries which I fell for, but the Isabel Dalhousie Philosophy Club books, and the Scotland Street series. In part I loved them because they put me in mind of the style of writing I had been aiming for when I wrote my Grace de Savira novels in the 1990’s, stories of an elderly astrologer intent on sorting out peoples’ problems. I’m not sure whether I hit the same style, but I finished two of them and duly – after a number of years of keeping them in a cupboard, put them up on to Amazon’s Kindle. Slowly people are beginning to read them, and I’m quite pleased about that because I loved writing them. Then I discovered writing for children, in the early 2000’s and had my Dreamstealers trilogy published, and following that I fell in love with history and have had two historical novels published : A Court in Splendour and The Bardic Monk. Much as I enjoyed the process of research and writing history, nothing quite matched my experience of writing about Grace and the characters in those early books. So I got out the third unfinished one recently, and began to work on it. Unfortunately I had lost the pace, the style, and was stuck in the twelfth century, floundering. Then I remembered Scotland Street and how it had been an inspiration to my style. So I listened to Scotland Street in the car, then read Love over Scotland and the World According to Bertie and loved them all over again, and the amazing thing is that the detail of them is so rich I found new things as well as  all the bits I remembered and have laughed and sighed my way through them. He is a total genius. So I also read all the Dalhousies again (and the new one) and even Von Inglefeld and his many uses for Olive Oil, what a clown…so thanks to Alexander McCall Smith and his brilliant life-enhancing dramas, for getting me back in the mood to write my Welsh Astrologer stories. Reading and writing do, after all, go together like peaches and cream, salt and pepper or rock n roll! And am I on a roll….

Sunday was a really special day when I was a teenager and found religion. I was in Church three times a day enjoying a wonderful rich social life, in a safe environment, surrounded by people who offered friendship and loyalty, and even a shoulder to cry on from time to time. Today was Sunday and as always it was a solitary day writing. My next Kindle book ‘Arianne Lexicon and The Five Charms’ kept me busy all day. In the process I discovered that my old school motto, Non Sibi Sed Omnibus…. is used by a large number of other schools and colleges. It means ‘not for oneself but for all’ apparently, so is quite a high moral call I suppose. It figures quite importantly at the heart of my Arianne story which is a teen fiction and  is so different from all my other books. I used to love Sundays, now I have to make myself like them by writing things to lift my mood. Out of all the week it makes me feel old. I wrote an email to my friends out in Portugal, Brian and Jane moved away last year and my annual Manchester trip is no longer an absolute certainty. They were such good hosts and always made me feel welcome in their genuinely delightful home.