This week I came to the end of a book I have been writing for longer than I care to remember. I abandoned it years ago, but thanks to a persistent friend who enquired about it regularly, I eventually returned to it to see what it was that had attracted her to it. She had read the first chapter, something that friends have done with other work of mine when I have wanted to share my new idea with them. This idea, a teenage detective, daughter of antique dealers, with the name Arianne Lexicon, was meant to be my foray into writing a proper formula detective story, something I have never managed before. Despite having written so called ‘mysteries’ before, the challenge of this one was to keep all the balls in the air, so to speak, and then bring them all together in a dramatic and artistic pile at the end. I got two thirds of the way through and gave up. My attention strayed into historical material and without the interest of the friend Arianne’s adventures would have died on the page without ever being finished. Euphoria follows always at the end of a long work. Even short stories can give me a high if I contrive a good ending. And that is why this book took so long. The planned ending didn’t work out, thankfully the actual ending was better than I could have hoped. 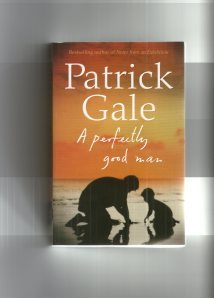 So euphoria comes and a real need to put it out of my head for a few days. How to do that? Read a new book by someone I admire. So yesterday I went out and bought Patrick Gale’s latest book, A Perfectly Good Man. Having devoured the first few chapters I am already in deep. For those who have not come across him, try Notes from an Exhibition, an extraordinary novel where the talent and bipolarity of the central character challenges and attracts simultaneously. I went from there to Friendly Fire, which I found happily in the Bookworm Second-hand bookshop and cafe in Grenoble, and was engrossed in between outings for an entire week. It is a lovely ‘rite of passage’ and more, and I followed that with Rough Music which I tried years ago and hitting a painful moment I left it. Returning to it I could not understand why I did that!

So my week has brought me an ending of one of my own books – hooray, and the most enjoyable beginning of reading someone else’s work.